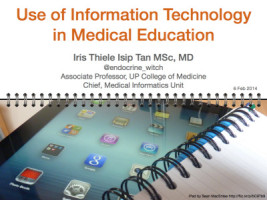 I don’t work for SlideShare nor am I receiving anything for this blog post. I thought of writing about this though after I got this ego-boosting email from SlideShare a few weeks ago. You are in the top 5% of the Most Viewed on SlideShare.

I’ve got 60 slide decks there as of today. I checked and was reminded that I uploaded my first deck Aug 2009. Wow, I didn’t realize it’s been that long! There are several slide decks missing though in my speaking career (if you can call it that), because at one point I opened a Pro account then closed it. I never got to transfer those decks in the Pro account to my free account. But on the whole, my SlideShare account at www.slideshare.net/isiptan is an online record of my presentations since 2009. I had slide decks before 2009 but that was before I became obsessed with making more engaging presentations. I didn’t feel comfortable sharing my work then.

It takes a lot of work to finish a presentation. The biggest audience I’ve ever had for a lecture was nearly 5,000 youth at a Y4IT conference in UP Diliman. But usually, there’s considerably fewer people at my talks. That’s why the idea of sharing my presentations holds considerable appeal for me! It gives these slides a life longer than its fleeting twenty- to thirty-minute shot at fame. And when one of my keynotes got ‘favorited’ by the Slideshare.net team and featured on its home page, I was hooked for good!

These are my stats for 2014. My most popular slide deck was viewed 8111 times! That beats my Y4IT audience. To keep myself grounded, let me tell myself out loud now (and I learned the term from Dr. Stef dela Cruz), these are just VANITY METRICS. What does it really mean anyway when one slide deck gets downloaded five hundred times while the other deck only has seven likes? I did get an academic promotion recently. I’m not sure if it actually mattered, but I included my SlideShare decks in my academic portfolio. That’s something concrete!

In the beginning, my SlideShare account was just a convenient way of sharing my presentations with others. Almost always, I make a quick get away after a talk and people would be approaching me armed with USBs. Giving my SlideShare URL saved time.

I soon began putting my SlideShare URL on the last slide of my decks to tell the audience. I still get approached by people after talks, no longer with USBs but questions, which I find more enjoyable.

As a novice speaker I used to get disturbed by the audience taking pictures while I was talking. The flash could blind me momentarily or make me forget where I was. And so I also began telling my audience at the beginning of talks that I would upload my presentation on SlideShare so they need not worry about taking notes or pictures.

But more amazingly, I’ve been approached on several occasions by people I didn’t know, thanking me for being generous enough to share these files. So I guess, it’s good for karma as well.

I’ve never been to Ukraine! But apparently I have friends there as 15% of my views come from Ukraine. Maybe, I should visit sometime.

Lately, I came across FOAM – Free and Open Access Meducation. Learn more by following #FOAMed on Twitter or by checking out http://lifeinthefastlane.com/foam/ –

FOAM is the movement that has spontaneously emerged from the exploding collection of constantly evolving, collaborative and interactive open access medical education resources being distributed on the web with one objective — to make the world a better place.

So now I’d like to think that my slide decks are a part of FOAM… and that it’s helping make the world a better place. Sharing is fun, try it!