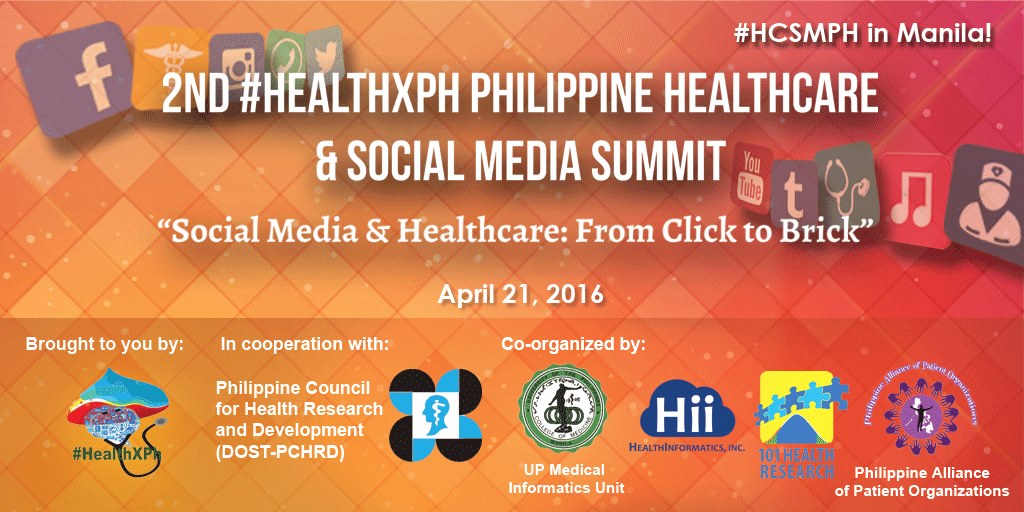 The first Philippine Healthcare & Social Media Summit was held last February 2015 in Cebu. The #HealthXPH team wanted to hold it February 2016 as well but we all got too busy around December last year. I had big plans!

The first summit last February 2015 was #HealthXPH’s way of bringing the virtual discussions in our weekly tweet chat to the real world. This second summit takes a step further by forging partnerships that can bring us “from click to brick.” We’d like to translate retweets, shares and likes to concrete action that can transform healthcare. Join us!

Finally, last April 21 with the generous support of the Philippine Council for Health Research & Development, #hcsmph pushed through at the Philippine International Convention Center no less.

Dr. Sidney Manahan was early at the venue.

Most awaited – our team reunion. People shake their heads in amazement, but yes we’ve done it again. We organized a summit purely online without a single face-to-face meeting.

A gathering! Helen and Buboy from Cebu. Remo from Mindanao. Gia and me here in Manila. We’ve done Cebu and Manila. Remo is smiling ear to ear – we think the next venue should be Davao City!

No less than former DOH undersecretary Ted Herbosa posting pictures on Instagram as the summit was opened by Merlita Opena of PCHRD on behalf of Dr. Jaime Montoya.

Didn’t even know he took this picture of me and Remo!

But I was especially touched by Buboy singing the invocation. May kurot sa puso! Helen ended up crying – she had to compose herself as she was up next to sing the Philippine National anthem. We thought about it too late but it would have been fab if we showed Remo’s best travel pictures as everyone sang the anthem. Check out his pics at the Hiker’s Itch.

The meeting room was full as I gave the summit overview.

But the best part of the opening ceremony was the keynote address of Dr. Willie Ong. Dr. Ong has several Facebook pages focusing on improving health literacy for Filipinos. He has 1.4 million followers on Facebook!

Doc Willie as he is fondly called inspired many that day, me included.

#hcsmph @DocWillieOng giving keynote address. First he says find your purpose/mission. A preamble to how he got started on social media.

If healthcare professionals present had any doubts about using social media for good, Doc Willie dispelled them.

Why can’t we become the media? So we can push for our healthcare concerns for the poor. – @DocWillieOng #hcsmph

Doc Willie explained how the conversation differs among those in public health and the clinicians.

Agreed with him wholeheartedly when he advised the audience to write in our own language.

Easily the best slide in his entire slide deck. Dr. Willie Ong’s father commissioned this painting by Thomas Daquioag. It’s on exhibit at the Co Tec Tai museum (named after Dr. Ong’s father) – the first and only medical museum in the country. I really need to visit that sometime!

A fitting way to end this blog post – reflecting on why I am on social media. #ParaSaBayan

More about #hcsmph in the next posts.