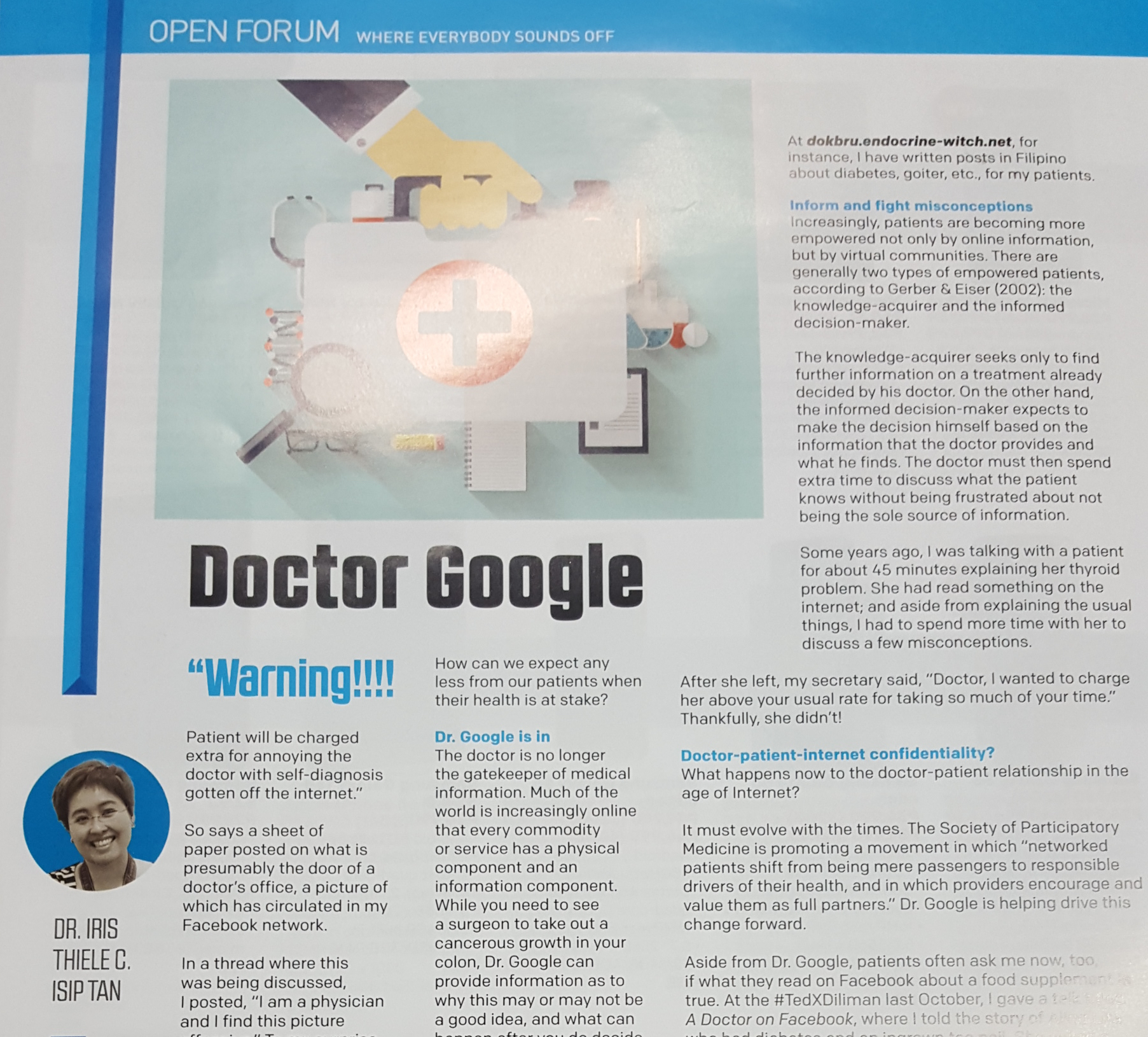 “Warning!!!! Patient will be charged extra for annoying the doctor with self-diagnosis gotten off the internet.” So it says on a sheet of paper posted on what is presumably the door of a doctor’s office, in a picture that has circulated in my Facebook feed. In a thread where this was being discussed, I posted, “I am a physician and I find this picture offensive.” To my surprise, my comment was promptly deleted. I felt as if I was cut off midstream as I was talking. Something that happens to patients often enough, more than doctors care to admit. An observational study in the US (Rhoades et al, 2001) showed that patients were only able to speak undisturbed for an average of 12 seconds before the doctor interrupted them, and that in an average encounter of 11 minutes, patients only spoke for about 4 minutes. Surely, you can imagine how things change when the patient comes in with information from Dr. Google!

How can we expect any less from our patients when their health is at stake? Much of the world is increasingly online that every commodity or service has a physical component and an information component. While you need to see a surgeon to take out a cancerous growth in your colon, Dr. Google can provide information as to why this may or may not be a good idea and what may happen after you do decide to have the surgery. The doctor is no longer the gatekeeper of medical information.

But you shouldn’t believe everything on the Internet! Our patients know this and that is why they still go and see a doctor. I think everyone tends to overestimate the perils of erroneous health information online. I blog because there are too few doctors out there and many snake oil salesmen. To protect our patients we can create content ourselves or give out what I call internet prescriptions. An internet prescription is a curated list of websites that I can recommend to patients for further reading after a consultation. At www.dokbru.endocrine-witch.net, I have written posts in Filipino about diabetes, goiter etc. for my patients.

Increasingly, patients are becoming more empowered not only by online information but by virtual communities. There are generally two types of empowered patients according to Gerber & Eiser (2002): the informed decision-maker and the knowledge-acquirer. The knowledge-acquirer seeks only to find further information on a treatment already decided by his doctor. On the other hand, the informed decision-maker expects to make the decision himself based on the information that the doctor provides and what he finds. The doctor must then spend extra time to discuss what the patient knows, without being frustrated about not being the sole source of information. Some years ago, I was talking with a patient for about 45 minutes explaining her thyroid problem. She had read something on the internet and aside from explaining the usual things, I had to spend more time with her to discuss a few misconceptions. After she left, my secretary said, “Doctor, I wanted to charge her above your usual rate for taking so much of your time.” Thankfully, she didn’t!

What happens now to the doctor-patient relationship in the age of Internet? It must evolve with the times. The Society of Participatory Medicine is promoting a movement in which

“networked patients shift from being mere passengers to responsible drivers of their health, and in which providers encourage and value them as full partners.”

Aside from Dr. Google, patients often ask me now too if what they read on Facebook about a food supplement is true. At the #TedXDiliman last October I gave a talk entitled A Doctor on Facebook, where I told the story of Aling Lita who had diabetes and an ingrown toe nail. She asked a manicurist to go after it. The next day, her big toe is red and swollen. She buys amoxicillin capsules, opens them and sprinkles the powder on her toe. Eventually, that toe gets amputated. Why did she do these and not see a doctor? While it may be a question of economics, it is often also an issue of health literacy. When patients do not get the information they need, they don’t get care that they need or worse, get care that they don’t need. Googling incurs data charges but Facebook is free. My Facebook page at www.facebook.com/EndocrineWitch is my attempt at using social media to improve health literacy.

Dr. Google is here to stay. But think about it, as Dr. Tracey Delaplain says on www.kevinmd.com,

“Dr. Google doesn’t really care about your health. Does that shock you? It shouldn’t. The Internet will never replace human interaction. It can’t show you compassion, empathize with you, give you a shoulder to lean on, hold your hand, rejoice with you or grieve with you. Dr. Google will never know you or care as much as I do.”